Why Do Fingers and Toes Prune After Shower?

For over a century scientists have questioned why glabrous skin (fingers, toes, palms, and soles of the feet) tends to wrinkle when immersed in water. Usually this phenomenon occurs in just five minutes whether in the shower, swimming, or simply washing dishes. It has long been known that the human body knows what to do to repair itself.

Indeed, in recent years it has been discovered that a fetus can send stem cells to a mother’s heart to repair it. Scientists with this thought believe this wrinkling is the body’s autonomic response to immersion in water.

After all, although you may be wet you are still likely to be capable of gripping with you fingers, hands, or even toes. Thinking to automobile tires could be a good example. Smooth tires are ideal in dry conditions hence the tires of race cars are smooth but treads are much better in wet conditions. 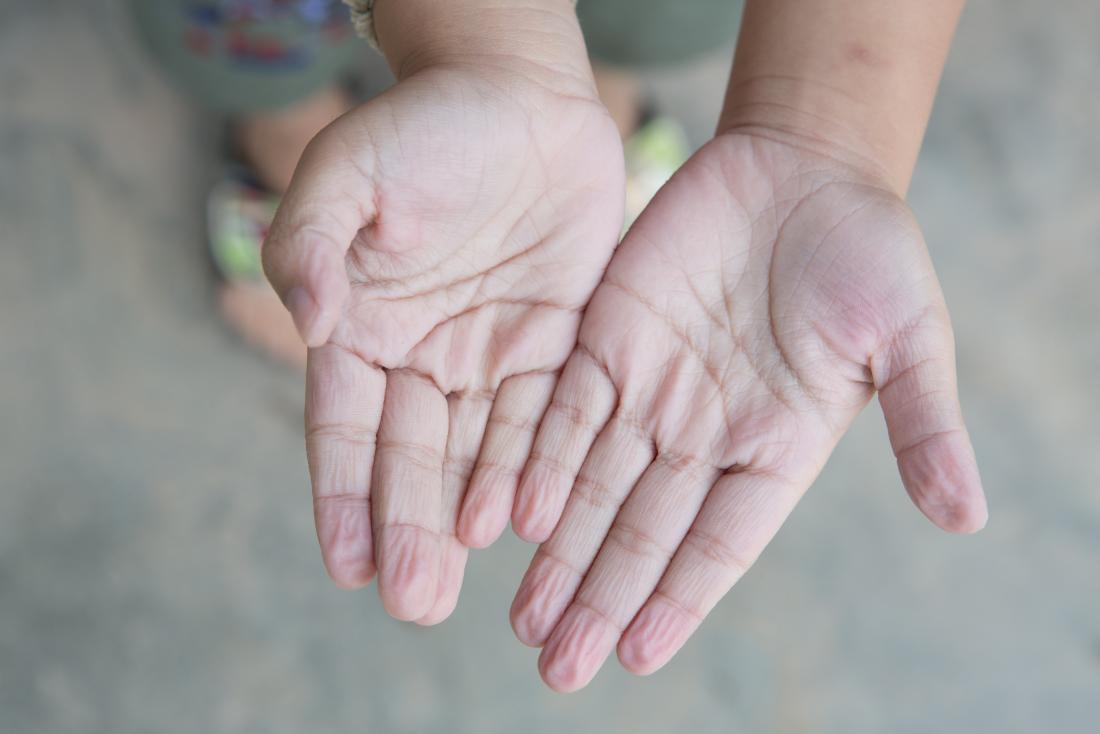 In 2013, it was shown that it was much easier to transfer small objects such a marbles from one bucket to the next with wrinkled fingers although there was no difference with dry objects. Other scientists believe this wrinkling phenomenon is to aid in locomotion rather than in transferring small objects.

After all we wouldn’t be at risk for hydroplaning while handling small objects. More studies need to be done on locomotion with both dry and wrinkled skin.

Yet another thought is that this wrinkling can be a means to support ones own body weight when immersed in water as water is funneled away from the body through the indentations caused by the wrinkles.

The outermost layer of skin contains  much keratin which is thee same protein found in hair and nails and are basically dead cells. These cells absorb more water causing a greater surface area while the subcutaneous skin does not thereby causing wrinkling.

But why does this phenomenon occur only to the hands and feet and not to the rest of the body?

Scientist believe this is because this is where the most keratin is found. Imagine using a shovel to dig in rocky soil if the skin of your palms and fingers was a thin as the skin on your face. It’s quite certain you would require a bandaid in very short order.

In either case, wrinkling of the hands, toes, palms and feet is a natural phenomenon and perfectly normal. 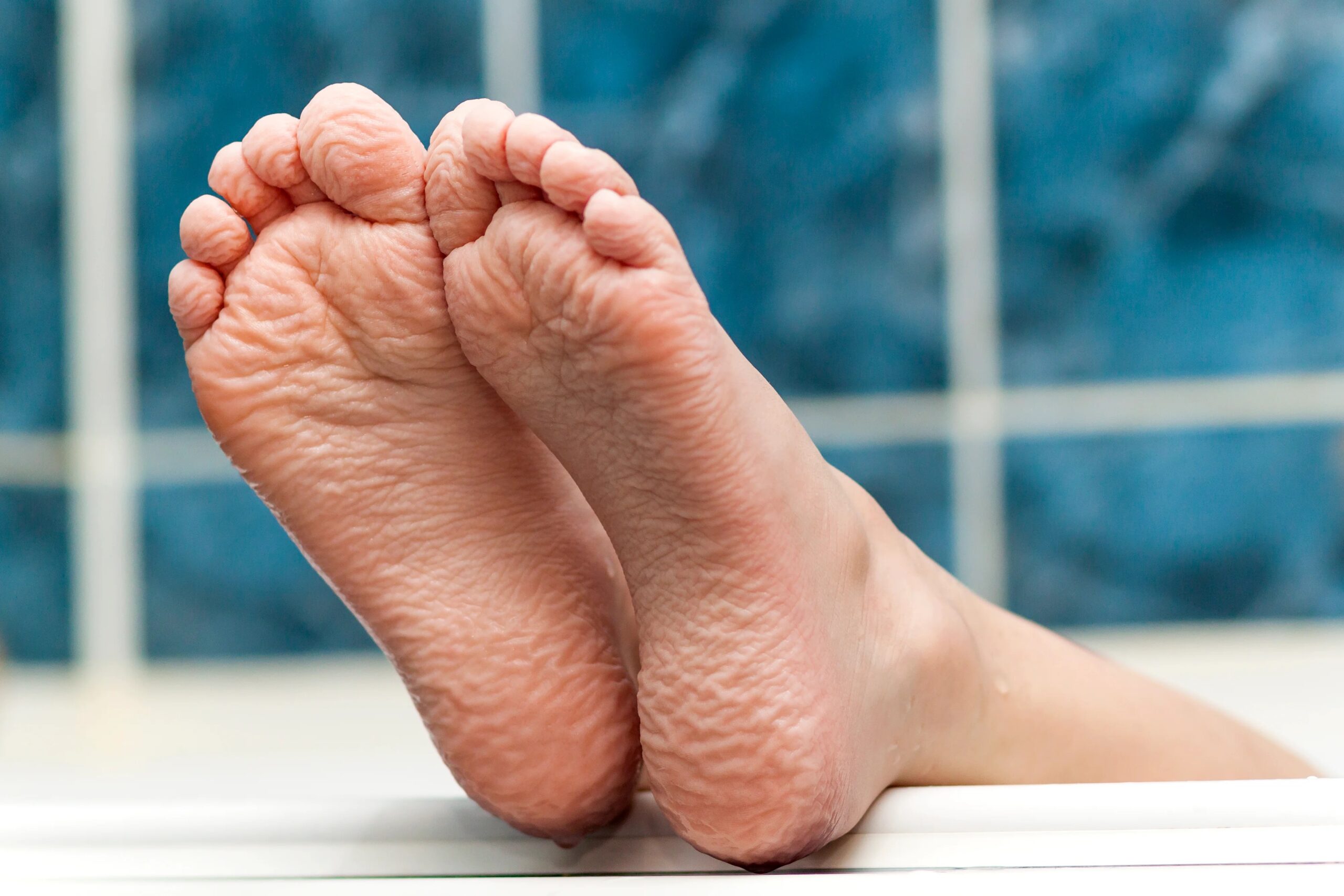 Ok… add to the last paragraph: Try pressing a dry finger to a drop of water and note that the entire surface of the finger will touch the surface. Then attempt the same experiment with a finger that has been immersed in water and wrinkled.

Note how much more quickly the water is displaced. And further, consider this: wrinkling doesn’t occur until after five minutes of immersion in water, meaning that incidental contact isn’t enough to result in wrinkling.

This response only occurs in rainy or dewy conditions and far more quickly in freshwater than saltwater which may be a reflection of the circumstances in which it originally evolved in primates.

Conversely, Taiwanese researchers recruited a 24-year-old volunteer who used wrinkled and dry hands to slide across a metal bar and measured the force necessary in each case.  They also asked the volunteer to force a small spring together under the same conditions.

Their conclusion: rather than finding no differences, they found there was greater difficulty under the wrinkled conditions.

It should be noted that this was a one-man experiment, and generally, no scientific conclusions can be made with such limited data. Certainly, if the wet-wrinkle response did evolve as an adaptation, it can be seen by these examples that it was not for the purposes of these contrived laboratory experiments if it can even be said it is an adaptation.

This phenomenon has only been found in humans and macaques, and more investigation needs to be done to discover what other animals exhibit this phenomenon. Perhaps, this wrinkling aided our distant ancestors in gathering food in wet conditions easing the ability to walk on stones and gripping wet vegetation.

If you concur that wrinkling does indeed aid in our ability to move or grip objects, then you may consider that we should have permanently wrinkled glabrous skin. Some believe this could reduce the sensitivity of the skin or cause it to be easily damaged.

It has been known since the 1930s that nerve damage will cause the skin not to wrinkle, thereby concluding that this is an autonomic reflex that did evolve from our ancestors.

1. What are the scientific explanations for why hands and feet prune after a shower?

There are a few scientific explanations for why hands and feet prune after a shower. One is that the water swelling the skin causes the small blood vessels to constrict, which reduces blood flow to the extremities.

This reduced blood flow causes fluid to seep out of the capillaries, leading to swelling and the formation of wrinkles or ridges in the skin. Another explanation is that the soap or shampoo used in bathing causes the skin to become more permeable, which allows water to seep into the skin more easily. This extra water then causes the skin to swell and form wrinkles.

2. What are some of the benefits of hands and feet pruning?

Hands and feet pruning have a few benefits. For one, it helps keep your extremities from getting too cold. It also helps prevent blisters from forming on your feet by creating a tough outer layer on the skin. Finally, it makes your skin softer and smoother.

3. Are there any ways to prevent hands and feet from pruning?

There are a few ways to prevent hands and feet from pruning. One is by avoiding long baths or showers – try keeping them under 10 minutes. Another is by using a moisturizer immediately after bathing. Finally, make sure you drink plenty of water throughout the day, as dehydration can also lead to hand and foot pruning.

4. What should I do if my hands or feet start to prune?

If your hands or feet start to prune, there are a few things you can do: First, try soaking them in cold water for 10-15 minutes – this will help reduce swelling. Second, apply a moisturizer to your hands or feet (preferably one that contains glycerin). Third, drink plenty of water throughout the day to stay hydrated.